Kenny started in the auction business as a partner at National Industrial Sales Inc. (NISI) an auction company specializing in the sale of machinery and equipment on a national basis.  He helped grow NISI from obscurity to the sixth largest industrial auction company in the U.S. within a two year period. Kenny supervised auction solicitation and auction logistics and grew to love the process and appreciate the auction process as the most accurate demonstration of true market value on a given day. After a very successful run, Kenny decided to go out on his own and formed Business Network Corporation (BNC) in 1985.

At the conclusion of a consulting contract for a large secondary aluminum sheet mill (having left NISI) Kenny got a call from Ross Dove, Chairman of Ross-Dove Co. (RDC). They had done some business together when Kenny was with NISI and quickly contracted Kenny and his new company to chase deals for RDC in the Midwest and East Coast.  This was the beginning of a 10 year consulting association and eventually a title of Senior Vice President where Kenny was charged with developing a real estate; government and financial instruments auction division.

In 1989 after trying unsuccessfully to sell a College Station apartment building and the Old Western Ghost town of Winkelmann, Texas, Kenny was politely informed by Kirk Dove, that while he was a great salesman, he knew nothing about real estate and if  he wanted to continue eating, he best get a commercial real estate partner! 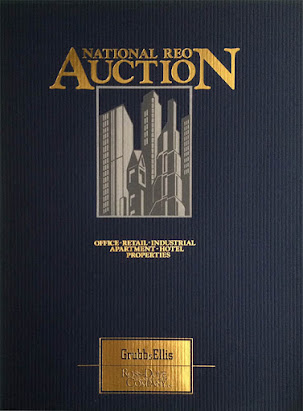 From that inspiring message and with the help of an introduction from Phil Simborg, a past client and Grubb and Ellis broker, Kenny was able to create the Grubb & Ellis/Ross-Dove Company Real Estate Auction Partnership. Starting with an expiring listing of Phil’s, a grand old resort in French Lick, Indiana and then one offs like the former Playboy hotel in Florida, The Paddlewheel Casino in Las Vegas, and even a church outside Chicago, the partnership successfully began selling commercial real estate across the USA.  After 11 trips to Washington DC, in a 6 month period, the new partners convinced the FDIC to send out a Request for Proposal (RFP) to conduct the first ever FDIC commercial real estate auction. The results were that in December 1991 and December 1992 the G&E-RDC Partnership conducted the first two ballroom and (Pre-internet) Satellite commercial real estate auctions ever held and sold and closed a record $800,000,000 in commercial real estate. Several other such auctions were held, notably the National REO Auction on July 8, 1993 in which over $100,000,000 of CRE, previously owned by banks, insurance companies and credit companies was sold.

How to leverage what and who you know.

Leveraging off of the success of selling FDIC real estate and after seeing a notice by a Chicago auctioneer about his selling a portfolio of NPLs for the FDIC at auction, Kenny called an FDIC asset manager for whom RDC had sold a Ferryboat tied up at the Embarcadero in San Francisco. The asset manager, who had been told by his boss to face west and keep walking until his hat floated if the ferryboat didn’t sell, was more than happy to connect us to an FDIC asset manager in San Francisco who wanted to try to sell some loans at auction. 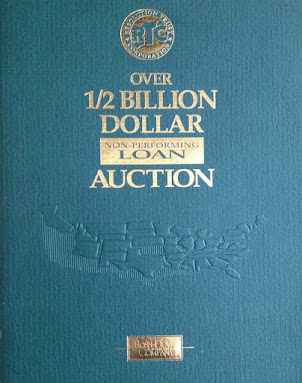 After walking out of the FDIC meeting and assuring the asset manager that they wouldn’t fail, Kenny and Ross were stumped by words the AM used; like bifurcate and bundle.  Having no idea what bifurcate meant and sure that he didn’t mean using string to tie (bundle) the loans together, Kenny went to Wall Street and convinced PaineWebber to create the due diligence and stratification process needed to package these loans (without string) into saleable lots. The PaineWebber/Ross Dove Loan Portfolio Co-Venture created a new venue for selling NPLs for banks and the government. A VP of Bank of America attended our FDIC loan auction and was a successful buyer of a few loans. He then invited us to Pasadena to view a portfolio of charged off personal credit card debt and that became our first charged off credit card auction. After a chance conversation with a VP from NCNB about auctioning the loan that secured a small percent of ownership in the Dallas Cowboys, the VP offered to give RDC a portfolio of NPLs secured by cars, boats and other toys. These successful auctions begat a call from a Mike Colby from the Resolution Trust Corporation (RTC) asking if he could attend the next NCNB auction as a guest and have us explain exactly what we did.  He forgot to mention that he was bringing 16 other RTC personnel, but it did help fill the room.  Impressed with what he saw and a big leap of faith we were hired to do the first $60,000,000 RTC NPL auction. 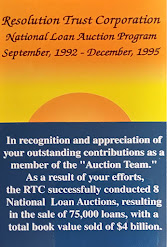 Our marketing guy, Nathan Wolfstein, made a graphically beautiful and easy to understand brochure.  He zip-coded the mortgage loans and put them into fairly small denominational lots of ten, so that almost any small investor had a chance. The theory was that a wealthy investor would pay more for loans in his city than a Wall Street house. In truth the small investor, when he didn’t win, pushed the Wall Street bidder higher than he would normally have bid.  It was a winner for everyone including the successful bidders, since the beginning average of 65 cents on the dollar was bringing 85 cents on the dollar 4 auctions later.  Those early risk takers made a great return. I remember doing the first National NPL auction on September 9, 1992 for the RTC that had a book value of over $500,000,000 with loans that ranged from $50,000 to 21 million. Sitting on our desk is a Lucite tombstone from the head of the RTC that says, and I quote.

RTC National Loan Auction Program September 1992 – December 1995 - “In recognition and appreciation of your outstanding contributions as a member of the “Auction Team.” As a result of your efforts, the RTC successfully conducted 8 National Loan Auctions, resulting in the sale of 75,000 loans, with a total book value sold of $4 billion.”

After I left RDC the NPL division was eventually sold to Dave Ludwig, who was working with me in St. Louis at the time. Dave went on to become a pioneer in the debt industry and continues to run the National Loan Exchange    (NLEX) to this day. In 2013 his company sold 3.4 billion dollars in non-performing loans.